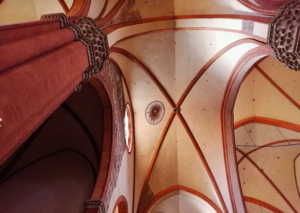 In the city of Bologna, ancient city of central Italy, inside the Basilica of San Petronio, there is the largest sundial in the world built inside a building.
The Basilica of San Petronio itself, the history of its construction and the works contained in it, deserve many observations, which I invite you to search for.
A first sundial had been built inside the Basilica as early as 1576, by the astronomer Egnazio Danti, motivated by the papal assignment of Gregory XIII with the aim of restoring the current calendar; this assignment will give life to the Gregorian calendar currently in use. Danti’s first sundial therefore had the purpose of improving the measurements of the times of the solar year. Subsequent expansion works, however, led to the demolition of the side wall in which Danti’s pinhole was placed.
In 1655, astronomist Dr. Gian Domenico Cassini arrived as a lecturer at the University of Bologna and was commissioned to build a new sundial. Cassini had to overcome various resistances to be able to carry out his project, which included, among other things, creating the pinhole on the ceiling and skillfully laying the meridian line in the middle of the columns of the church, in order to fully exploit the possibilities offered by the dimensions of the building, also taking care, unlike Danti, to project the luminous disc onto a level surface; Cassini defined his sundial Heliometer.
The sundials built inside large buildings using the light that filters through them, offer a much more precise reading than those that involve the use of the gnomon, the stick that projects its shadow on flat surfaces. Furthermore, thanks to the dark room effect, what enters the dimly lit building through a hole is not simply a ray of light, but an inverted image of the sun, which therefore also allows us to calculate its diameter, and during eclipses it shows the progressive concealment of the solar disk.
Cassini’s intent was no longer to calculate the times of the day and year, as for the astronomer Danti, but was to demonstrate the Galilean theses. However, he could not explicitly state it in those years, due to the resistance of the ecclesiastical world and common sense. By measuring the diameter of the Sun, which should be smaller in summer, as the Earth is located at the aphelion (furthest point from the Sun), the Galilean and Copernican thesis of the eccentricity of the Earth’s orbit can be confirmed.
Subsequently, the astronomer Eustachio Manfredi leaves us, in his book De Gnomone Meridiano, a long series of measurements made daily, which confirm the reduction in the diameter of the solar disk, projected on the floor of the basilica in summer.
This confirmation of the heliocentric Copernican system operated by Cassini is significant only in contrast to the geocentric model of Ptolemy and Tycho Brahe, because, a researcher friend of mine (who has a Youtube channel called IL PLOTTOLOGO) explains to me, these observations are perfectly compatible with modern Zetetic models based on the theories of Rowbotham and Dubay, which predict an increase in the height of the sun’s orbit during the summer period of the northern hemisphere.
Along the sundial line we find the twelve zodiac signs, indicating the months of the year: this is an excellent example of how in the past science, faith and astrology coexisted in a peaceful and synergistic way, side by side. We must recognize that, in past centuries, there was no division between them: it is the contemporary mentality that wants to separate the various disciplines into sealed sectors. The search for knowledge is always the same, whatever path you choose to follow, and the different points of view are not in competition with the one we have adopted, but are instead a precious enrichment, which, if accepted, can give a strong impulse to our personal and collective progress.
Article and Research by Prof. Lucio Stanzani