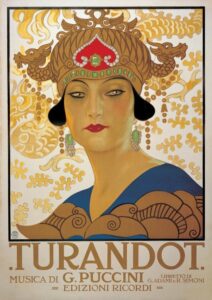 Princess Turandot, the secret of the name

The play, right from the title, focuses on the concept of the name. The name contains the history and identity of the person: the being and essence of the individual is concentrated in the name of a person.
As happens in the topos of magic, where those who know the name of the dragon or demon can control it and have it at their service, also in this story the knowledge of the name of one’s interlocutor implies having over her the power of life and of death.

The great masses of the people represented by the choir and also most of the servants of the Forbidden City in Beijing are nameless, and in fact they are only objects in the hands of the very few powerful.

King Timur, the ousted Tartar king, is the shadow of a man, depicted like a beggar; his name must be hidden so that the Chinese enemies, who chased him away in the past and who are still looking for him to kill him, cannot recognize him. His life is completely dependent on a servant, Liu, who looks after him by virtue of the love she feels for the young prince Calaf, son of Timur; her love for the prince came from a simple smile that Calaf gave her one day at the palace. In this courteous act of the prince towards the servant there was no malice or any interest, proof of the fact that a simple act of kindness can give life to great bonds.

King Timur bears, certainly not by chance, the same name of the famous Turkish leader, of Tartar origins, Tamerlane (Muhammad Shuja Uddin Tīmūr Barlas), who lived between 1336 and 1405, the one who, after Genghis Khan, rebuilt the immense Mongol-Tatar empire from the Far East of Asia to the gates of Europe.

The Emperor of China, the Son of Heaven, is never called by name in the work, even if, from the previous versions of the story of Turandot that inspired Puccini, we know that his name is Altoum. This choice of the author to keep the mystery about the name of the highest office present in this story, is perfectly in line with the aforementioned magical principle, and in fact contributes to preserve intact the universal power and authority of the Emperor over subjects and kingdom .

Princess Turandot, known and famous all over the world for her beauty and purity, secretly binds in her intimacy to her deceased ancestor, Princess Lou-Ling, reviving her in herself. Princess Lou-Ling was “the princess with a clear voice who reigned silently over China” (a significant oxymoron chosen with skill by the librettists Adami and Simoni) at the time of the invasion by the king of the Tartars. It tells the story that the Tartar leader, also unnamed, but characterized by the nickname “king of the seven flags”, took control of the Chinese capital and gave way to a new Chinese-Tatar dynasty (probably the Liao dynasty of the Tartars Khitan 907-1169, or the Jin dynasty of the Nuchen Tartars 1115-1260, in north and west China), silencing forever the voice of the princess. Turandot, still full of resentment towards foreigners due to those bloody events in which she feels spiritually involved, decides to subject each of her suitor to the test of three riddles which, if not overcome, will lead to death by beheading.

The three ministers of the empire are Ping, Pang and Pong. They have names that are bordering on credible; such names are necessary for the role they play, and represent non-identities, which rise from the crowd, but still remain puppets. In the scene dedicated to them, in fact, they long for a sweet retreat in their respective hometowns to escape the sad life of the court.

Even all the defeated princes are remembered only through their characteristics and not by name: for example, here is “the gemmed Indian”, to underline his wealth, or the “Tartar with an arc of six cubits”, to remember his extraordinary stature (typical of Tartar). The literary stratagem of Adami and Simoni of citing the aspirants to the throne (between) past, serves to strengthen the figure and the archetype of the hero who, approaching the test, sees in front of him the miserable remains and the insignia of those who before him they failed in the same enterprise. This situation is typically found in medieval tales, where the knight ventures into the castle of the princess, held captive by the terrible dragon. Along the way he finds the lifeless bodies and weapons of those who preceded him and failed; nevertheless he advances intrepid, because in his heart he knows that he will meet the triumph. In the story our hero always wins according to the literary rule of the happy ending; therefore, during the narration of his enterprise, it is necessary in some way to leave references of the other innumerable previous heroes who have been defeated and whose single adventures are forever silent.

Prince Calaf first faces the test of conviction: all those around advise him not to undertake the arduous task and hold him back in his reckless intent, but he is sure of victory and repeats to himself that he will certainly triumph over any difficulty. The very object of desire is therefore denied him: it is repeated to him that Turandot does not exist (denial of the self) and that even love itself does not exist. Finally he is admonished that, if his desire is only of a physical body, he could have easily a hundred women bodies, rather than seek death by chasing the cold princess; he could surround himself with dozens of real bodies instead of getting lost behind an ideal body that does not exist (denial of the ego). Surrendering during this first test would be equivalent to losing the sense of the self and the sense of the ego, giving up being a specific individual, to blend into the shapeless mass of the many who are alive but do not live, those who have no name.

After the prince has won the challenge of the three riddles, Princess Turandot, in an attempt not to marry him, will ask his ministers to bribe him again, by offering Calaf the bodies of other women and immense wealth, this time concrete and real, but at this point, after the victory, the attempt to bribe him is desperate: the existence of such bodies is anonymous if compared with that of the already conquered princess, and it is therefore very easy for Calaf to refuse.

Turandot’s riddles are scenically drawn from the remains of Princess Lou-Ling, to highlight that it is her ancestor to impose this kind of conduct. After two traditional riddles, the third and decisive one concerns the name itself, that name which is, but it is not yet, that name which, if said, guarantees power, absolute power not only over the person, but over the whole kingdom. The name of Turandot is obviously known by everyone, but it must be recognized in its form of “answer”: just as the key of the treasure chest must match the right lock to access the wealth, this name must also be remembered and brought back to its owner, to free her from the spell of possession that binds her to a past that is now concluded, in this specific case to allow Turandot to finally be queen and not just princess.
The change, however, is not easy: Princess Turandot is possessed by the vengeful spirit of her ancestor Lou-Ling, which requires her to continuously mortal sacrifice, because of her grudge. Lou-Ling has no intention of accepting her defeat; from a darkened spirit, on the other hand, we certainly cannot expect any respect for the rules of honor: patience and respect are only necessary attributes of a warrior of light.

Princess Turandot (still possessed by her ancestor’s spirit) shows herself capricious and invokes all her powers and reasons to withdraw from her oath, while Prince Calaf mildly welcomes her fear, agreeing to let the dark night pass without claiming his prize. He himself leaves a further possibility of escape to Turandot: if she discovers the name of the prince during the night, he will be in her power and the princess will be free to kill him. Here is another metaphor of the last challenge between Good and Evil in which darkness (Lou-Ling), already mistress of the field (Lou-Ling already reigns and commands through Turandot), fights for the conquest of the spirit of a pure man (Calaf).

Turandot launches into the search for the name of the prince, putting all his resources into play; she moves her servants, and no means will be neglected. She will give the worst of herself right now that she is defeated, and she will continue to plead for corruption and sacrifice. The pride of the ruthless power, however, will be countered by the humble love of a servant, Liu, the last keeper in the dark world of the prince’s real name, and Liu herself will volunteer to all torture and finally sacrifice her own life in order not to betray him. Thus Lou-Ling through Turandot will require other tortures and sacrifices until dawn, this time even of a pure and innocent soul like that of the servant Liu, no longer just the one of the daredevil suitors, who aspired to conquer the hand of the princess of China.

Turandot’s frozen heart therefore does not seem to waver and Prince Calaf, who seeks love and not victory, finally offers her his last gift: he virtually sacrifices himself to her by revealing his name to him before dawn, submitting himself completely to the princess, renouncing with this act to any right, reason and life.

Exhausted by this last gesture of remission by Calaf, the barriers erected by the princess finally collapse and in an instant she is dressed in love. Attention: the final victory of love should not be taken for granted at all! Attempting this last route, at the expense of his own life, was for Calaf the only attempt left. Faced with the pain and hardness of a frozen heart, it is necessary to give and give again; as long as you still have something to donate, you will need to give it, at least if the goal you pursue is love. Calaf not only gave his life to Turandot, he gave him his self and his love, and Amor ch’a nullo amato amar perdona (love which doesn’t forgive to any beloved person not to love back).