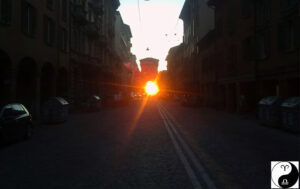 Bologna the secret clock hidden in the city

Bologna is a very ancient city.
Even today, walking through the streets at night you walk through time.
Only the rare buildings of the last century break the rythm in the midst of the organic development of medieval houses. Here history is still present, alive, it speaks a symbolic language that enters inside you.

The very structure of the city is a CLOCK that from piazza Maggiore radiates towards its twelve doors, and this partition channels specific energies, which are expressed in the zodiac and in the twelve signs.

“ARIES ♈ the first sign, is represented by Porta San Felice, and it carries the energies of the Sun and Mars. Porta San Felice faces west and stands on the axis of the Aries-Libra, Spring-Autumn.”

On some days of the year it is possible to see the sun going down in the middle of the door, looking from the center of Via San Felice which projects from the door towards the city center.

The axis Ariete-Libra on Bologna goes from Porta San Felice to Porta Maggiore and on this axis you can find the Roman decuman.

The character of Mars is also reflected in this place by the presence of a large barracks, the opening of an industrial area and the Maggiore hospital, which every Aries should keep close around him. 😉

There are spells that are pronounced while walking and watching, and they can carry you beyond space and time, they are registered in the buildings and paths we have inherited, and it is possible to celebrate them (I mean in the etymology of attending) with a simple walk, if well disposed in the mind and in the heart.